Saul is an interesting figure, chosen from the least clan of the least tribe to lead Israel as its first King.  One would think that such an act of favor would be met with gratitude, but if it was, the gratitude didn’t last long and Saul turned to disobedience — because he feared men more than he feared God.  I suspect he had been that way his entire life, but that it hadn’t been an issue because his status had exempted him from any position of leadership.  Once King, he just couldn’t stand up for what he knew was true, and hadn’t the courage to follow through in faith and obedience. 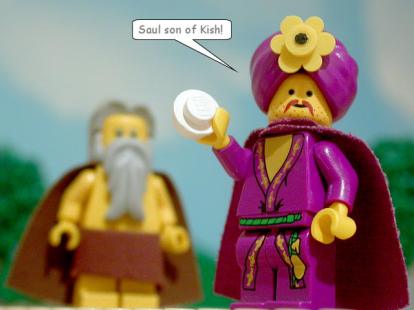 And so he did not put under the ban those things which his followers did not desire to be put under the ban.  He also spared YHVH’s sworn enemy, the king of the Amalekites, leaving another, the prophet Samuel, to do what was right.  But the Kingdom was ripped out of Saul’s hands and someone even more unlikely was secretly chosen to take his place. 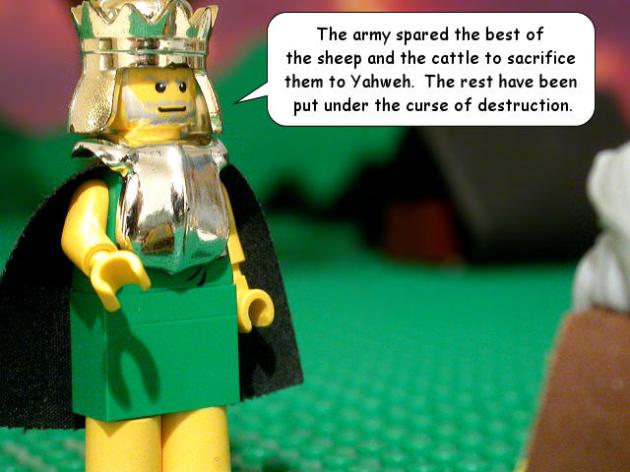 In this, King Saul is a picture of the Anti-Messiah who is to come.  But considering what he does next, he is also a picture of those who know and betray the future King.

David and Saul were not strangers.  David ministered to Saul and drove off his demons, David saved Saul’s butt — heck, he saved the whole Kingdom’s collective butts when they could not stand against Goliath.  Saul made David promises, only to break them, he tested David, only to resent his successes, and finally Saul tried to hunt David down to kill him, all the while knowing that David was to be King.  Saul knew David, knew he was God’s anointed successor, and even though David never hurt Saul — the insanity that gripped him once the Spirit of YHVH departed from Him, drove him not to repent and serve God and glorify God, but to destroy David.

In the same way, we see ex-Messianics deny Yeshua, Messiah ben David.  These were not strangers to Yeshua.  Yeshua ministered to them, Yeshua saved their butts from their own personal Goliath’s.  They made Yeshua promises, called Him Lord, only to break them, they tested Him, but threw out all the evidence of His passing the tests — and that not being enough, they hunt Him down and recruit others as well.  They knew Yeshua, knew Him as Messiah ben David, and even though Yeshua never hurt them — an insanity grips them once the Spirit departs from them, driving them not to repentance and to serving God and glorifying Him, but to destroy ben David.

Saul even repented a bit once or twice, but to no avail, he went right back chasing after David.  We see such a rebirth when the Spirit came upon Saul, and such a great death when it left him.  Saul could have been a great King.  Even after losing the Spirit he could have been effective, but his lust to chase after David and all those who loved David rendered him a murderer who killed even the priests who innocently helped David.  Nothing was sacred in his quest to destroy the coming King.

And it all started because Saul cared way too much about men and what they think, leaning on their understanding — forgetting what God had done for him.

38 Therefore, in the present case I advise you: Leave these men alone! Let them go! For if their purpose or activity is of human origin, it will fail. 39 But if it is from God, you will not be able to stop these men; you will only find yourselves fighting against God.”

But knowing Saul, he probably would have just killed Gamaliel instead.

Cooperation and Hearing the Voice of YHVH

The first thing I want to tell you is that everyone hears, if they have the indwelling of the Spirit (Ruach) of Elohim. But churches and society and often our own rebellion teach us to ignore and fear that voice.  Churches often tell us that the voice speaks through the pastor.  Society tells you that hearing a voice makes you crazy.  Rebellion involved ignoring and shutting down the voice.  The result is that the voice gets shut down and sometimes we are afraid to hear it, or resentful of it.  Or we want to hear it as long as it tells us something “good” — we want to hear what tells us to do exactly what we are already doing (btw, I am always suspicious when I hear a voice telling me to do something I want to do).  One of the end results of this is that many people cannot discern, even once they do receive the baptism of the Spirit, the difference between their own voice and the voice of the Spirit — even though they would swear on a stack of bibles that they can.  I will tell you this — I am a person who hears very clearly compared to most, and at times I am still not sure about the difference and need to test each word.

So, it isn’t an issue of hearing, it’s about realizing when you are hearing, then hearing more clearly and discerning the source.

There have been times in my life when I hear better than others, and each time it was easy, I was doing something very vital without really thinking about it.  But it wasn’t until I heard Mark Biltz express the concept that I started to realize how important it was.  I am going to paraphrase him here —

“Torah isn’t about obeying the God of the Universe, it’s about cooperating with your Father.”

When I first heard it, I was offended at the thought of the idea of cooperating with God, because to me, cooperation is something that equals do together — but I was wrong.  Cooperation is something that is of mutual benefit to both parties, when they have agreed that a certain course is best.  And so the course is Torah, it is the absolute standard.  When we cooperate with Elohim by walking in it, we are avoiding penalties and inviting blessings.  Everything, from animals to the subatomic, cooperates with Torah.  Stars don’t do their own thing, bears don’t decide not to hibernate, salmon don’t sit on the couch during the spawning season.  They COOPERATE with Elohim.  Cooperation is different than obedience, by a long shot.

Obedience is simply following marching orders, doing no more and no less.  Ever worked in a Union?  You have some people who only give what they have to give and no more and they take everything they have been told they have a right to take  — that is obedience, and because of their contract, they can get away with that being enough.  There are others who cooperate in order to get the job done, not counting the minutes of their break, not just doing “their job” but functioning as part of a whole for the good of the whole.

The third attitude is the beginning of cooperation, it is the picture of a child who isn’t looking for a way to mollify a parent, but instead looking for a harmonious life for the entire family, with the Father as the epicenter.  But cooperation, from the heart, is only possible if there is a trust relationship.  No one can truly cooperate with a volatile, inconstant, tyrant — because with someone like that there is never a harmonious “big picture.”

Cooperation means more than doing what we are told, it means always being willing to hear that more needs done.  It means being willing to hear anything and do anything.  It means being unafraid and unoffended at the idea that we might hear things that are unpleasant or dangerous (in fact, wanting to hear the bad is a sign of great maturity!).  Our desire to cooperate must run so deep that we are willing to forgo our own agendas, and say goodbye to our own way of doing things.  Cooperation means NEVER being the person in total control, ever again.  Cooperation means we become less, and that we serve and that we never seek to be greater, and never seek to rule.  It is a mindset of wanting to function entirely within the framework set up by Elohim, not for your purposes, but for His.  It is a mindset where He is all, and He becomes truly the Lord of our lives.

When I have that mindset, I don’t even usually have to focus on that still small voice, because I can hardly avoid hearing Him, because His voice usually comes through as guidance when my attitude is one of wanting to cooperate with whatever guidance He sees fit to deliver! But when I focus on self, it becomes laborious to seek out counsel, I really have to work at it, because in all honesty sometimes I make a conscious decision about what I am and am not willing to hear.

True cooperation, 100% cooperation, is not something our flesh is able to walk in continuously, lets be honest, but it is something to strive for.  Straight obedience never has to come from the heart, it can simply be a decision or an act of will.  Pure obedience springs from the depths of a circumcised heart, in cooperation and harmony and in a relationship of divine love with Elohim.  That is where shalom is to be found, and that is where we hear without even trying.

So learn to drop your distrust, your resentment and your fears — and by so doing, truly make Him Master.  And when you start hearing things you never wanted to know about yourself, that’s a really good sign! 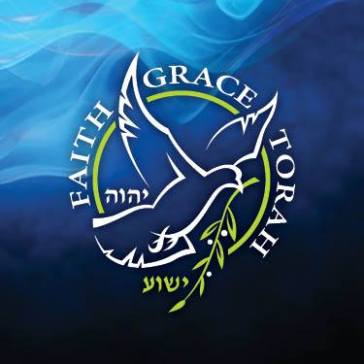